My art teacher and I decided to write a grant for 5 ipads to share between us and we got them this past school year- just in time for me to have surgery first, then my art teacher a couple months later! We were both in and out over the school year so we're both checking out apps and how we are going to use them in centers and for classroom activities this summer! Lucky me, I have the sweetest 5 and a half year old and have been having her *ahem* review (PLAY PLAY PLAY!) with some apps. Her absolute favorite- and I have to say mine, too- has been Monkey Drum! Best part is- IT'S FREE!!!!!! You can also put this on an ipod touch if you have those instead of an ipad (some apps are only ipad friendly and not ipod touch). 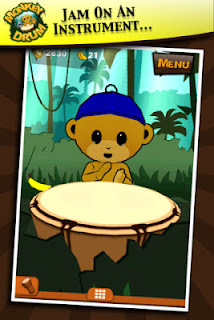 There are so many good things about it- you choose an instrument (some you have to purchase to use, but there are 3 to choose from in the free version) and play a pattern and the monkey plays it back. The cute part is if you touch the monkeys head as part of the pattern, it makes a funny "boing" sound and he wobbles his head side to side. If you touch his mouth, you'll hear a lip pop, and if you touch him side to side, he spins around. Occasionally a banana will drop and he eats it- in a VERY cute way! Another part of the app is the song creation, which is very interesting for little ones and again, you can change instrument sounds. Other animals are available, including my daughters favorite; a panda! From an Orff perspective, this app is excellent; students experience "playing" instruments and are fully involved in the creation of their musical pieces. There is no musical/rhythmic notation, which I like for young players as when we use the Orff approach we want students to experience and create FIRST and later analyze rhythmic/melodic/harmonic structure and form. This is a great app for little ones- I would say through 1st grade. I'm adding more apps to the ipads and will let you know what I like/don't about them.
Posted by Aimee at 5:10 AM No comments:

School is Over.. Now What?

The ending of the school year is always an interesting time.. cleaning up the millions of loose papers in the paper "organizer" on my desk, cleaning out the dust bunnies in the Orff instruments, repairing instruments and mallets and taping books back together, and taking pictures and "stuff" off the walls for repainting/repair over the summer. It's also a time for meetings, planning, and looking forward to changes for the next school year. We're all tired but we soldier forth, trying to "keep our heads in the game" to do the work we need to for our students, our neighbors children, and our own. I relish this time of year; a time to ask hard questions (are we placing the children at the forefront of what we do? Is this lesson or that unit of study the BEST for the children? Is everything we do the BEST for the children?). I'm excited about these questions; they make me a better teacher and make me ask hard questions of myself, too- am I doing everything I can to be THEIR best musical expert? Is the material I'm using the best vehicle to teach concepts of rhythm, melody, harmony, form, and musical expression? When I stop asking these questions at the end of the year, I stop learning and growing as a professional and as a musician. So, walk on, friend, and ask yourself the tough questions; don't simplify and leave school mentally and physically; push yourself to dig deeper. A Thought to Ponder... I've learned that you shouldn't go through life with a catcher's mitt on both hands; you need to be able to throw something back. Maya Angelou Read more at http://www.brainyquote.com/quotes/authors/m/maya_angelou.html#WhgpLKT1g1Zyq8vO.99
Posted by Aimee at 9:58 AM 2 comments:

Email ThisBlogThis!Share to TwitterShare to FacebookShare to Pinterest
Newer Posts Older Posts Home
Subscribe to: Posts (Atom)
The views expressed on this blog are mine alone and do not represent the views of my employer or any other person or organization.

I'm a little off-beat; funky, creative, crafty, with eclectic music tastes. I'm a proud Mainer but have lived in NC for a long while now and love it. I have a Master's Level in Orff Schulwerk certification, and a Master's Degree in Music Education. I'm in my 29th year of teaching; 25 at my current school. I have an amazing hubby and and a wonderfully artistic 15 year old daughter. I'm passionate about teaching music, my faith, arts and crafts, and adoption (our daughter was born in China). I also love to help teachers and present at workshops and conferences around the US and Internationally. Hope you find some fun ideas to try with your kiddos! Blessings